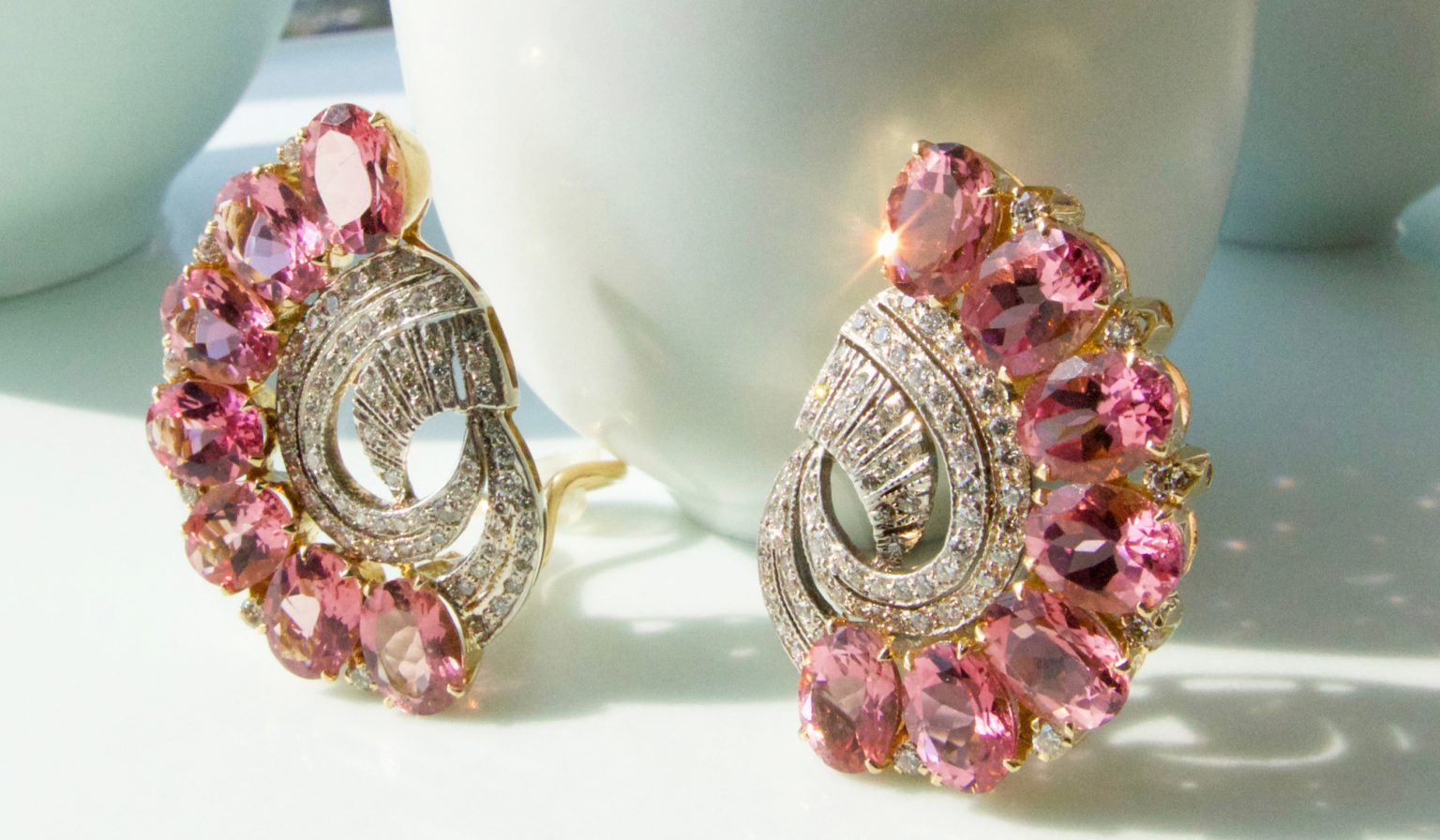 Posted at 13:05h in Birthstone, Tourmaline and Opal by jlm_admn

October’s gemstones are pink tourmaline and opal
October is one of the months that has not one, but two stones allocated to it. (June and December have three.)
So whether you’re thinking of choosing a gemstone for yourself or as a gift for someone else, that may leave you with a dilemma.
Which gemstone should you pick?

Why two gemstones for one month?
But before you decide whether to pick pink tourmaline or opal, you may be curious to know why some months have more than one gemstone. And to answer that question we need to know when the idea of allocating each month a stone began.

Where did the idea of gemstones originate?
The history of birthstones has its roots way back in the Bible. The King James Version references gemstones an extraordinarily 1,704 times!

But you’ll find a more detailed description of their possible origins in the Book of Exodus, that was written from stories passed on by word of mouth, sometime between 600 and 400BC.

However it wasn’t until the 1st century that Jewish historian Titus Flavius Josephus (c.37-100 AD) carried out research that linked the twelve stones to Aaron’s breastplate – a sacred object worn by the High Priest of the Israelites to communicate with God. Attached by shoulder straps at the corners it contained twelve gemstones.

Twelve is the magic number
Flavius believed there was a connection between the twelve stones in Aaron’s breastplate (signifying the tribes of Israel as described in the book of the zodiac) the twelve months of the year, and the twelve signs of the zodiac. And he compiled the first list of Birthstones based on his findings.

Sadly, even two thousand years ago when Flavius was writing, the names of the gemstones were hard to translate, and the Breastplate hasn’t survived until modern times. So the gemstone’s identity are open to debate.

Translations and interpretations of the passage in Exodus the breastplate have varied widely, with Josephus himself giving two different lists for the twelve stones.

Gemstones become official
Fast forward to 1952 when the Jewellery Industry Council, the oldest international organization in jewellery sector, and established in 1926, decided to clear up the confusion and create a list of accepted birthstones.

So, for example, opal was originally the gem trade’s recognized birthstone for October. But the Council suggested that pink tourmaline should be an alternate stone – changes were accepted and approved by the American Gem Society and the National Retail Jewellers Council.

The question is still: opal or tourmaline?
But knowing why some months have two, or even three gemstones doesn’t make it any easier deciding which one to choose.

If it’s for a gift you could, of course, do a little research. You could be quite blunt and ask “what gemstone do you prefer – opal or tourmaline?”

But if you want your gift to be a surprise, there are subtler questions to ask. Have they a favourite colour? If it’s pink, then pink tourmaline is the logical gemstone to choose.

Opal is better known to most people of course, and opaque with flashes of colour. It’s also more fragile than tourmaline, and particularly suited to wearing as an earing or pendant.

How much do they cost? Or how little?
It’s possible that price might be the deciding factor in picking which October gemstone. However, like other precious stones, there’s an enormous difference in cost depending on the quality of the gem.

700,000, or 1.2 million dollars? That’s rich!
The world’s most expensive opal, is a 998-gram gem called the Fore of Australia. It’s the largest known high-grade opal on earth and valued at around 700,000 US dollars. However it’s not for sale even if you could afford it, as it’s been on permanent public display in the South Australian Museum in Adelaide for over 60 years.

You’ll find the world’s most expensive pink tourmaline in Brazil. This was discovered as recently as 2011 in a mine, called “the Great Divide” it’s for sale at around $1.2 million

The chances are either of these stones are beyond most people’s budgets. So if you need a little more help to choose which one is right for you, or as a present here’s a little more information about each.

“Semi-precious” stones. But priceless.
But first one thing that you might be interested to know is something that they have in common: both are semi-precious rather than precious stones. Although that’s perhaps a rather misleading description, as the difference between “precious” and “semi-precious” has no scientific explanation, and the categorization is mainly due to the perceived value and rarity of a stone (diamonds, rubies, emeralds and sapphires are “precious”)

However when many “semi-precious” stones can be more valuable than a “precious” one, the name is even more arbitrary.

Let’s look at opals in more detail.
Opal isn’t just a gemstone for October – it’s the national gemstone for Australia too. Not surprising because vast deposits of it were discovered there in the 19th century. Before that its main source was in a place called Červenica beyond the Roman frontier in Slovakia.

However, its history goes back a long way. Its name derives from the Latin “opalus” which means “precious stone”. And slightly misleading as these days it is labelled “semi-precious” – even though, as we explained before, that’s no reason to devalue it.

Opals for hope.
Both the Romans and the Orientals believed that the opal was a symbol of hope. While according to Indian folklore, a beautiful woman was turned by the gods into an opal that sparkled with all the colours of the rainbow.

Today the meaning of the opal birthstone has come to mean good fortune and luck.

A long time in the making.
Opal has also been around quite some time geologically speaking too.
Its formed as water runs through the earth and picks up silica from sandstone. Then it runs into natural cracks or voids caused by faults or even decomposing fossils, leaving behind a silica deposit.

It’s thought that this process began about around 30 million years ago, until some of the silica turned into opal. And it takes around 5 to 6 million years for a 1cm opal to mature.

Yes, tonight Josephine.
There have been famous opals in history. They were set in the Crown jewels of France and Napoleon presented Empress Josephine a brilliant red opal called “the Burning of Troy”.

Opals amused Queen Victoria.
After falling out of favour in Europe in the late 18th and early 19th centuries, they were restored to popularity by Queen Victoria who wore opals throughout her reign. The Royal Court of Britain then regarded it as a model for fashion around the world.

You’ll be tickled in pink.
So what should you look for in a pink opal? Natural pink opal is typically found in Peru, not just Australia.
It’s less rare than black or white opal too, and can hence come at very affordable prices. But there’s a host of factors that determine its price.

So, for example, if it has a rare or unique pattern its value can be enhanced. Brightness enhances value too. Its shape should ideally be oval. But crack-lines in the stone lowers price.

Seek expert advice.
But altogether there’s so many different factors that affect the value of an opal, that if you’re considering spending a significant amount of money on one, you should seek the opinion of an expert.

Look for a jeweller with National Association of Jeweller accreditation to help you.

Now let’s take a look at tourmaline.
Tourmaline is typically formed in volcanic igneous rock. When magma cools it sometimes contains aqueous solutions rich in elements like silicon and iron. As this rich mix of elements gets colder and crystallises it forms pegmatite rock, containing several different mineral crystals including tourmaline.

Some of it was formed as far back as the Carboniferous age over 300 million years ago.

So, for example, in the 1500s Portuguese explorers obtained green and blue tourmaline from indigenous Brazilian people and from panning streams in search of gold. They thought these stones were emeralds and sapphires and sent them back to Portugal to be cut into gems and used to make jewellery for royalty and wealthy citizens.

Similarly, Dutch traders in the late 1600s or early 1700s thought they had found emeralds off the west coast of Italy.

It’s not just the Portuguese and Dutch who thought that tourmaline was something else either.

The largest ruby in Europe? You could have fooled me.
Caesar’s Ruby’ is a 255.75ct gemstone that has been regarded for as a precious stone for centuries and traded between the French, Russia and Sweden since the late 16th century. Yet it wasn’t until 1922 that it was identified as not being a ruby at all, but a tourmaline.
The news caused disbelief in Sweden where the stone had been a part of the crown jewels between 1689 and 1777. Indeed, one of the major Swedish newspapers questioned whether it was the same stone once thought to have been the largest ruby in Europe.

The confusion about the tourmaline’s identity is even reflected in its name, which comes from toramalli, which means “mixed gems” in Sinhalese (a language of Sri Lanka).

A colourful background.
What’s beyond dispute is that tourmaline displays the widest spectrum of colour of any gemstone, because of the presence of elements such as aluminium iron, magnesium, sodium, lithium, or potassium. So the stone comes in every colour of the rainbow and can even be colourless.

A gem worn by gems.
Today it is one of the more popular fashionable gem stones and is a favourite of celebrities like Gwyneth Paltrow, Selena Gomez and Scarlett Johansson.

Like all gems, tourmaline’s value is determined by size, weight, and colour. Small stones under 5 carats are very affordable. If you find pure blue, red, orange, yellow, or purple tourmaline stone it will command a higher price. And tourmaline crystals without cracks or flaws are worth more too.

Tourmaline or opal. Or tourmaline and opal?
We hope that you now know a little more about tourmaline and opal which means you’ll have a better idea which is right for you, or as a gift. They’re both beautiful, extraordinary stones and October gems. So if you’re still struggling on which to buy, how about buying both to be worn on alternate days?