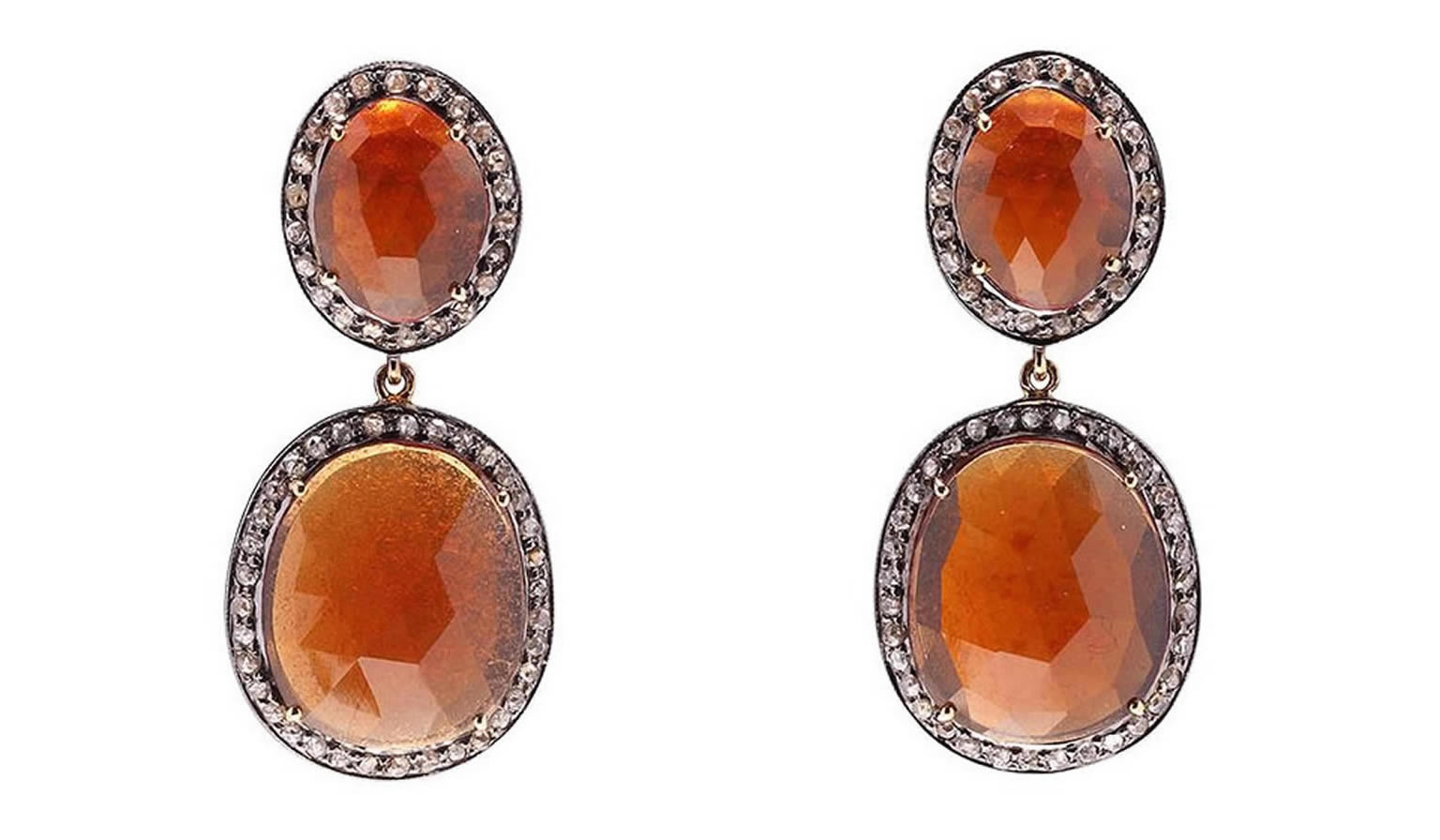 Posted at 11:05h in Birthstone by jlm_admn

Do you think of a rich, red gemstone when you think of a garnet? You’re not alone.
Over 2,000 years ago Aristotle the Greek Philosopher wrote “The garnet is a red gem, but not like the ruby, its red is much more like that of a flame”.
Indeed the name garnet comes from the 14th century Middle English word “gernet” that means dark red.

But don’t be misled. It’s a misnomer, as garnet is actually a name used for a larger group of minerals that share similar physical properties and crystal form, but have a different chemical composition. And that different chemical mixture means garnets occur in multiple colours, including green, yellow orange, peach, green, purple, brown and pink.

Not rare, but beautiful
As well as coming in a variety of beautiful different colours, garnets are also one of the more numerous gem stones. However that doesn’t distract from their beauty, and people have been attracted and fascinated by them since the dawn of civilisation. Which is why you’ll find examples of garnets throughout human history, in everything from ancient gold rings to modern bijouterie.

Garnets features in folklore throughout the ages
Garnets are considered to be traveller’s stones, and Noah’s Ark is said to have a Garnet lantern to help navigate during the night. The Romans also believed the gem protected travellers, and if it sparkled it meant approaching danger.

The ancient Chinese said red garnet gems represented the soul of a tiger that had been transformed to the stone after death. And Navajo Indians in Utah, USA, believe the gems bring luck and protection to the wearer.

Garnet in ancient civilisations
Garnet has been valued as a beautiful and precious stone from the very beginnings of human civilisation. In Egypt, for example, garnet amulets have been unearthed by archaeologists in the tombs of the pharaohs.
While in ancient Persia, garnets were deemed so precious, that only kings were allowed to own or wear them. The patriarchs of Rome had carved signet rings made from garnet. With red garnets the most commonly used gemstones in the late antique Roman world and after them the “barbarian” peoples who took over the territory of the Western Roman Empire.

A popular gem stone in the 16th and 17th century too
Because of its widespread availability in later times, it’s also often found set into medieval rings and ornaments. And by the late 16th and 17th century it was used throughout Europe in everything from rings and earrings to pendants, frequently accompanied by colourful, polychrome enamel and gold mounts.

Many of these Renaissance and later garnets were polished into large and irregular-shaped hollow-back shaped and polished gems known as ‘carbuncles’. If you’re interested, today you can see many of these garnets on display at the Museum of London.

Still in great demand today
The affordability and abundance of garnets has meant that they have never fallen out of fashion. And today they are still as popular as they have ever been.

For example, before she got engaged to Prince William, Catherine Middleton often wore a pearl and garnet gold ring. The press frequently speculated whether it was a gift from Prince William.  And a garnet cabochon set into a flower brooch from Jackie Onassis’s estate sold for over $100,000 at auction.

How garnets are formed
Garnet is a dense and hard silicate mineral which occurs in many rock types.
But like many other gems, it’s typically created by immense heat and high pressure within the earth’s crust that, over millions of years, transforms original igneous or sedimentary stone into denser, more compact metamorphic rocks.

Heat and pressure and aeons of time
Most garnet forms where the earth’s plates combine and shale is impacted by regional metamorphism. The heat and pressure of metamorphism breaks chemical bonds and causes minerals to recrystallize into new structures.

It creates gemstones made up of silica and oxygen with an assortment of elements and minerals creating numerous variations.

Many different varieties
These are broken into six different varieties, Almandine, Pyrope, Spessartite, Grossular, Andradite and Uvarovite. These are then divided further into group depending on factors like colours, sources or and blends of type. In other words, there’s a lot of choice of garnet

Hessonite garnet
However we’re going to focus on hessonite garnet, one of the most affordable and popular types. It was highly regarded in the 1960s and 70s, and a recent demand for earth tone jewellery has seen a resurgence in popularity.

The cinnamon stone
It’s also known as the “cinnamon stone” not only because of its colour, but because it originated in Ceylon, now known as Sri Lanka, the land of spices. Typically, it’s a yellow-orange to reddish orange variety of grossular garnet, although it can also be found in other colours like pink and orange.

Softer but not lesser
It’s less transparent than other gemstones of the same colour like topaz and citrine, and it also has a lower manganese content and specific gravity than other varieties of garnet.Hessonite has a lower density and hardness than other garnets too – indeed the name Hessonite comes from the Greek word ‘hesson’ which means inferior, although in this instance it does not imply that the stone itself is inferior to other garnet, merely that it is formed of softer material.

Look for the swirl
Hessonite is an easy stone to identify, because of a visual effect that resembles disturbed water within the stone. This roiled appearance has also been referred to as a “heat wave” or “swirl” effect with liquid currents. As a detail, they are visible only under the lens, but give the gem an overall treacly glowing character.

Close-up-images reveal swirls that can range from thick and heavy to delicate and barely perceptible.

Hessonite stones, perennially in fashion
Garnets made from hessonite have been popular for hundreds of years.
From the 16th to the 18th century hessonite (known in those days as ‘Jacinth’ or ‘Hyacinth’) was in great demand as a stone for fashioning into cameos or setting into bracelet clasps.
And it’s still as loved today as ever.

Found all over the world
Today the best-known hessonite deposits are in Sri Lanka but hessonite is also mined in Brazil, India, Canada, Madagascar, Tanzania and the United States.
And hessonite garnet is valued the same way as many other gem stones – by the four Cs.

Hessonite colour
Traces of manganese are responsible for the colour of hessonite garnet can range from deep yellow or golden orange to cinnamon brown. It also often contains tiny honey-coloured inclusions, although these inclusions don’t detract from the value of the stone.
The most sought-after colour is bright golden orange and lighter stones tend to be more brilliant too.

The clarity
Inclusions won’t normally detract from the value of hessonite, but the stone should be transparent or translucent. If the garnet is opaque it will be worth less.

Does it make the cut?
Hessonite garnet should be cut to enhance the stone’s colour.
If it’s not well cut the colour will be too dark and decrease value. The most common shapes are oval and cushion, then pear and emerald.

Carats add to value too
Like all other gemstones, carat weight adds to price too.
Garnet crystals are usually small, from microscopic up to about 6 inches in the case of grossular. Many deposits are small grains of crystals in or on their host rock. A typical garnet crystal is about half an inch to an inch in diameter.

Turn to a traditional jeweller
January’s gemstone is beautiful and affordable, whether it’s in a bracelet, a ring, necklace, pendant or other jewellery.

If you’re interested in hessonite garnet or any other kind of gem or attractive stone, it’s always safer to seek the advice of a traditional jeweller like John Lloyd Morgan for guidance.