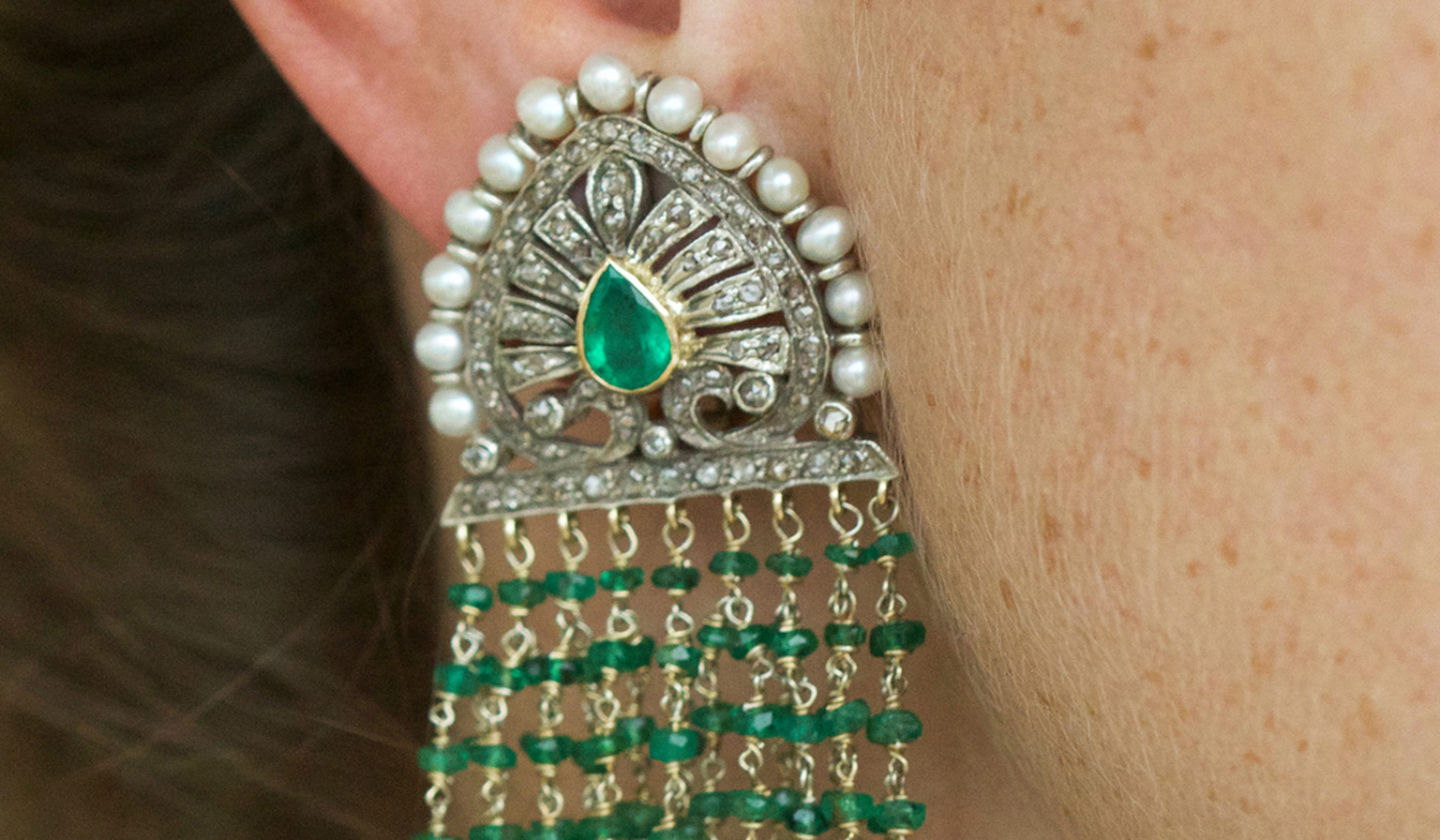 18 May Green With Envy

Posted at 12:12h in Birthstone, Emeralds by jlm_admn

Emeralds are one of the four recognised precious gemstones, along with rubies, sapphires and diamonds.

Created deep inside the earth’s crust, the oldest emeralds are about 2.97 billion years old, and the earth is “only” 4.5 billion years old. They’ve been part of human history for a relatively long time too, with the first known emerald mines in Egypt, dating from at least 330 BC.

Made from beryl
Emerald is made of a mineral called beryl that forms in hydrothermal veins  – where hot circulating aqueous solutions replace the original rock with new mineral species. Or in magmatic pegmatites – igneous rocks that form during the final stage of a magma’s crystallization, which contain exceptionally large crystals and occasionally minerals that are rarely found in other types of rocks.
When beryllium, aluminum, silicon, and oxygen are at the right temperature and pressure, beryl forms if there’s enough space, growing in hexagonal crystals, some of which can grow quite large.

With a trace of green
Beryl in its pure state is colourless. But trace elements add colour to the mineral.
Varieties of beryl include aquamarine, created by trace elements of iron, and manganese responsible for the pink colour of morganite and the extremely rare red beryl. But with emeralds, its trace elements of chromium and sometimes vanadium gives it its green colour.

First discovered in ancient Egypt
The earliest account of emeralds dates back over 5,000 years, with the earliest written history of the Egyptians indicating that slaves unearthed the bright green stones from rocks.
And they were first mined in Ancient Egypt around 330 BC by the pharaohs, until over 200 years late during Cleopatra’s reign in Egypt they had become one of the most highly prized gems in the world.

From Egypt to Rome
Eventually, they found their way by trade to Ancient Rome, where the Romans drilled holes through raw crystals to be worn as talismans. The Romans later took over the mining operations in Egypt until the mines became depleted.
Rome’s Pliny the Elder was enchanted by the emerald’s colour which he described in his Natural History, published in 100 AD when he said that “nothing green is greener.”
He is also quoted as saying that “no gem in existence is more intense than this” so he was obviously quite an emerald fan.
However, it’s the ancient Greeks that gave us the name for emeralds – from their word for green “smaragdus.”- and in vulgar Latin Esmaralda, or Esmeraldus is a variant of the word.

Emeralds – now available from South America
Egypt was the main source of emeralds in Europe until the Spanish Conquistadors came to Central and South America in the 1400s.
As they conquered the land, as well as gold and other minerals, the Spanish seized the emerald mines that had previously been run by the Aztecs and the Incas.
The South American variant of emerald, particularly the specimens from Columbia, was deemed even more beautiful and verdant green than Egyptian emeralds.

Popular with the clergy
Emeralds were important to the clergy of medieval Europe, and they are mentioned several times in the bible. During the 12th to 14th centuries, Christian clergy believed that gemstones like emeralds could heal those who were sick in mind or body.
Even those who embraced more traditional science believed in emeralds’ mystic powers. Dominical monk Albertus Magnus (c.1193-1280), the father of modern botany and zoology thought that emeralds could improve the memory and calm restless spirits.

Emeralds by the shipload
It is during the Tudor period that vast quantities of emeralds began to flow into Europe from the New World.  The conquistadors scoured the New World for emeralds and José de Acosta, a sixteenth-century Spanish Jesuit missionary and naturalist in Latin America, wrote that a ship returning him to Spain in 1587 carried over two hundred pounds of emeralds.
At first, these emeralds from the New World were worn only by members of the Spanish royalty.  By the end of the 16th century, this style had spread to nearly all the European courts -as did the craving for emeralds.
Then during the Renaissance, massive improvements in metalsmithing and stone cutting in Europe meant jewellery ownership spread beyond the aristocracy and clergy.

Supply decreases demand
However, the influx of huge numbers of emeralds into Europe caused their value to drop precipitously.
Previously emeralds had been valued above diamonds, rubies and sapphires. But after the European conquest of the Americas, high-quality emeralds came pouring in.
Today the greatest volume of fine quality emeralds still comes from South America, with Colombia yielding the largest amount of emeralds, contributing to more than 50 percent of all emerald production worldwide

So that’s what it’s made from
Despite its increased popularity and more affordable prices, very little was known about the chemical and physical properties of emerald until the late 18th century. This was when it became classified as a variety of beryl, and distinct from all the other green gemstones with which it had been categorised.

Loved by the British monarchy
Emeralds are a perennially popular gemstone with British royalty.
It is reputed that Henry VII of England once gave an emerald ring to a man who showed great valour in combat.
Prince Albert commissioned a gothic-inspired diamond and emerald tiara for Queen Victoria in 1845. Made by the royal jeweller, it featured 19 inverted pear-shaped emeralds, the largest weighing 15 carats.
Queen Mary wore an art deco emerald choker in 1911 at the Delhi Durbar, or “Court of Delhi” – an Indian imperial-style mass assembly organized by the British in Delhi to mark the succession of an Emperor or Empress of India at the height of the British Empire.
Later it was given as a wedding gift to Princess Diana from Queen Elizabeth.

A rare gem
Don’t be misled into thinking that diamonds are necessarily the most precious gemstone.
Emeralds are 20 times rarer and often more expensive than diamonds. However, because they are less dense than a diamond, they appear larger even if they have the same carat weight.

If it’s not the right shade of green, it’s not an emerald
If there is one defining characteristic of emeralds, it is their rich green colour. Even Ireland’s named the “Emerald Isle” in reference to the vivid green of the gemstone.
High-quality emeralds display a deep verdant green, with a slight blue-green or yellow overtone. If they are too pale, they lose their status and become categorized simply as green beryl. Similarly, light greenish-blue beryl is classified as aquamarine and yellow-green beryl is called heliodor.

It can’t be a vanadium green emerald – unless you’re an American
Confusing the issue, in the 1960s, the American jewellery industry changed the definition of emerald to include the green vanadium-bearing beryl. As a result, vanadium emeralds purchased the United States are not recognised as emeralds in the UK and Europe. In America, the distinction between traditional emeralds and the new vanadium kind is made by using terms like “Colombian emerald”.

Let’s make it clear
Clarity is another important factor in deciding the value of an emerald.
Although scoring a respectable 7.5–8 out of 10 on the Mohs gem hardness scale, emeralds are the softest gemstones, with a deserved reputation for being fragile. The way in which crystals are formed in their matrix results in a stone that typically has many inclusions, which can be anything from air bubbles to bits of other minerals to internal hairline fissures that compromise the strength of the emerald.

Inclusions can add value sometimes too
Sometimes, however, these inclusions can actually increase the value of an emerald.
Known as ‘jardin’ (French for garden) in the trade, they can create attractive patterns, making no two stones the same, which actually increase the value of the gem. Due to their inherent inclusions, emeralds are often treated with oils or resins to enhance their clarity and improve their quality and grade.

Cut and carat
Obviously cut and carat also have a part to play in the valuation of an emerald.
As they are prone to so many inclusions and are so fragile, cutters often step cut the best specimens. Although many designers have also carved intricate designs into cabochons too

It takes a lot of effort to find a big emerald
Carat weight affects price, with larger emeralds rarer than smaller ones and very difficult to find in mines. On average, you have to sift through five tons of dirt to find an emerald over 1 carat in gem quality. Which is why a 3-carat emerald costs more than three 1-carat emeralds of the same quality.