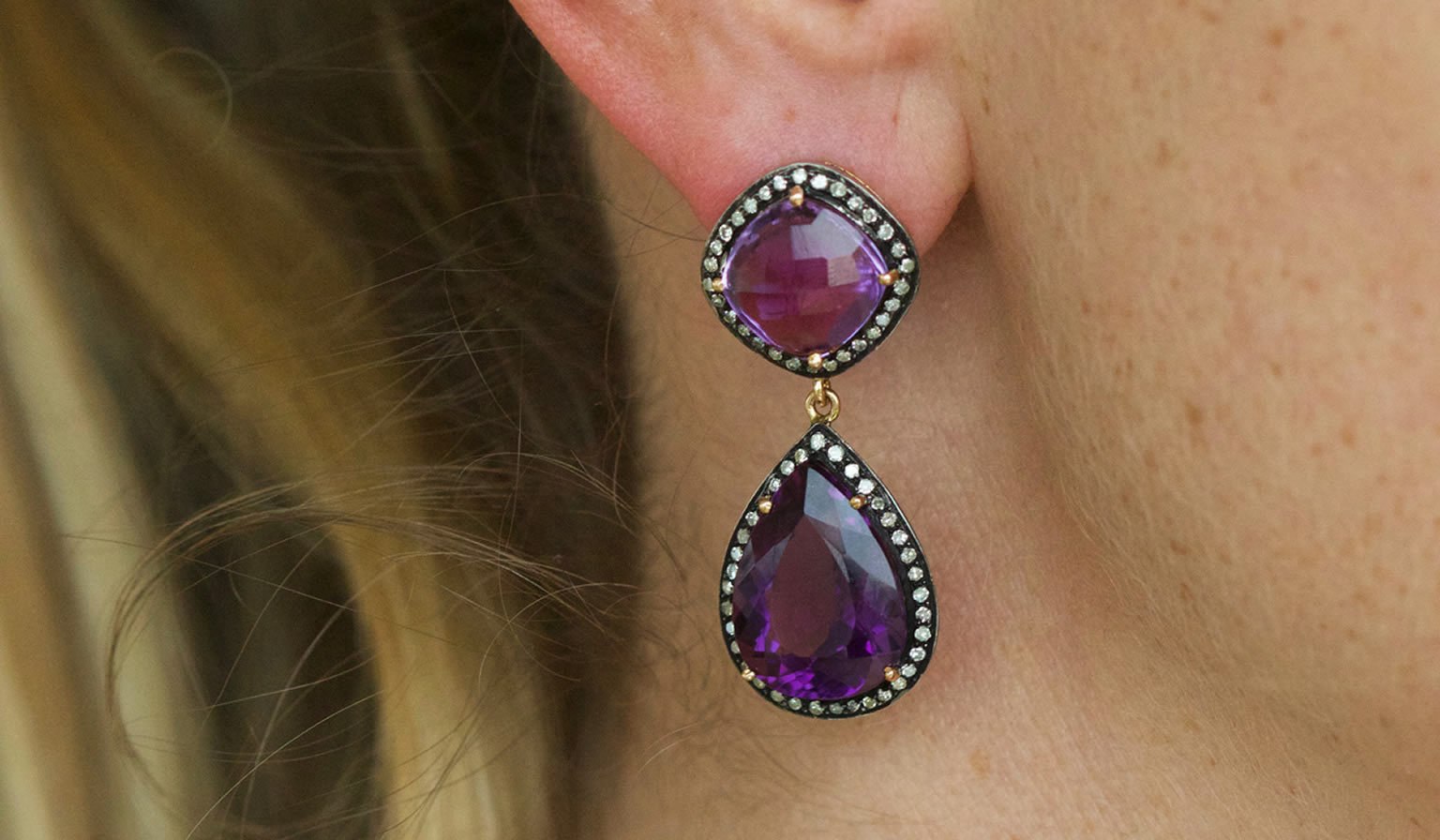 Posted at 12:02h in Birthstone by jlm_admn

The world’s most popular purple gemstone, it’s been used in personal adornment for over 2,000 years. It’s made of quartz, a hard crystalline mineral composed of silicon and oxygen atoms, with the purple colour deriving from traces of iron in its structure.

How amethyst is formed
Normally it’s found in fractures and cavities of igneous rocks, made by the solidification of molten rock. As the magma cools, silicon dioxide in water begins to turn to crystals, with the slower the cooling the larger the crystal.

The composition of the water changes over time too, with varying amount of iron incorporated into the surface of the crystal. Radiation emitted by surrounding rocks cause the iron to change the colour of the crystal to purple, in varying degrees of intensity.

The ingredients for amethyst success
Amethysts can also be created in metamorphosed rocks (formed when rocks are subjected to high heat, high pressure, hot mineral-rich fluids or some combination of all these factors) hydrothermal veins, rocks deposited by hot springs and some sedimentary rocks. All that’s needed are the basic ingredients of pockets or cavities for deposits to form, silica-enriched water of around 50-250 °C, ferric iron impurities, and gamma radiation.

Natural radiation helps determine the colour
By the way, don’t be put off by the radiation. Depending on the type of rock, it emits varying amounts of natural gamma radiation with higher levels associated with igneous rocks.

Just wait a few million years. Or more
The quartz can take millions of years to form – typically between 40 to 400 million years.
It’s estimated that a two centimetre crystal will form in ten million years, with the growth rate determined by the conditions of heat and pressure, as well as the availability of silicon nutrients and water. Because of its stability, and resistance to weathering, billion-year-old quartz crystals can look just as recent as Alpine rock crystals formed a mere 10 million years ago.

The cure for alcoholics
The name amethyst comes from the rather unusual Greek word, that means “not intoxicated” – amethystos or amethustos. Alcohol and its consequences presumably played an important part in the life of ancients, and there’s several legends linked to the mineral, wine drinking and sobriety.

Tainted by the God of Wine
According to one, Amethyst was a young virgin who upset the ancient Greek God of wine, Dionysus (or Bacchus in the Roman version) when he became intoxicated with red wine. Fearing the anger of a God, Amethyst cried out to the Goddess of chastity Artemis (or Diana in Roman civilisation) for help, who came somewhat dubiously to her rescue by turning her into stone.  Dionysus seeing what had happened was full of drunken remorse, crying into his goblet which overturned and saturated the white stone, turning it purple.

Me? Drunk? (hic)
Perhaps it’s simply because the rock is a similar colour to red wine that the ancients decided it could help ward off drunkenness. Goblets carved from amethyst were meant to nullify the negative effects of drinking wine, although it’s more likely that the purple crystal was actually giving water the appearance of wine.

It wasn’t only the ancient Greeks and Romans who believed amethysts to have sobering properties. The ancient Egyptians used the stone as the representative of the zodiac sign of the goat – and enemy of vines and vineyards, and hence the antidote of wine.

Keep calm, don’t panic!
Whether it’s a clear head even after a few glasses of wine, the serenity of prayer, or the ability to focus in the face of battle, Amethysts are associated with calmness of mind, purity of spirit and soberness of thought in many different cultures.

The Christian gemstone
The first mention of amethyst in literature is in the Bible. It’s one of the gemstones present in the High Priest Aaron’s breastplate in the Book of Exodus, representing the twelve tribes of Israel. It’s maintained a place in Christian culture ever since, featuring in the Episcopal rings of Bishops, once again for its supposed properties of sobriety, representing abstinence from alcohol at Pentecost.

Loved by St Valentine
Amethyst’s royal purple colour is also used to symbolize Christ, and Saint Valentine was said to wear a ring set with an antique Amethyst carved with an image of Cupid. The stone is a symbol of Saint Matthias the disciple who, according to the biblical Acts of the Apostles 1:21–26, was chosen to replace Judas Iscariot after Judas betrayed Jesus. And the twelfth foundation of the Holy City of Jerusalem was built of amethyst.

Buddha is a fan too
Buddhism is another faith that holds this gem in esteem. Tibetans consider amethyst sacred to the Buddha and Buddhist prayer beads are often carved in amethyst.

A sign of wealth and power
Amethyst’s appeal isn’t just to religious faiths. Its rich purple colour is connected to wealth and power.
Until the development of synthetic fibres, purple was the most expensive colour for clothing, and the dye was created from a species of marine snail. Its use was extremely restricted in ancient times and the amount of purple on a person’s toga was used as an indication of rank. It’s likely that amethyst was similarly worn as a symbol to display a person’s high status.

Cleopatra, Caesar and Mark Antony had a thing for amethyst
Cleopatra famously wore an amethyst ring throughout her relationship Julius Caesar.
Mark Antony is also said to have helped make amethyst gems a popular fashion item among Roman noblewomen.

Popular with royalty
Just like purple dye, amethyst was rare before the 18th century, and one of the most valuable gemstones alongside diamonds, rubies and sapphires.
Perhaps that’s why you’ll find it in many royal collections across the globe.
For example a large cabochon amethyst sits above the Cullinan diamond (incidentally the second largest cut diamond in the world) in the Imperial Sceptre of the British Crown Jewels.

Napoleonic amethysts, passed down from mother to daughter
The British and Swedish royal families boast amethyst suites in their jewellery collections The British pieces were owned originally by the Duchess of Kent, Queen Victoria’s mother, and the Swedish pieces are known as ‘Napoleonic amethysts’. These were originally a gift by Empress Josephine to her daughter-in-law Augusta of Bavaria, who in turn gave them to her daughter when she married into the Swedish royal family.

Most precious in the Americas, until Brazilian stones flooded the market
It’s ironic that in the Old World, amethyst was considered one of the Cardinal gems, which meant that it was one of the five gemstones considered more precious than any other until massive deposits were found in Brazil during the early 19th century. Then prices plummeted.

Amethysts were popular among everyday folk as well as royalty
The Victorians loved large, impressive jewellery, and as the price fell with more and more of the semi-precious gems being unearthed, amethysts were the only affordable stone possible to create extravagant suites of jewels. But to a Victorian well-to-do, there was no better way to display one’s wealth and success than with amethysts.

More supply, less demand
The discovery of massive amethyst deposits in Brazil caused the first decline in the price of these beautiful purple stones, but it was a glut of another stone that cause the next decline in popularity.

Diamonds versus amethysts
The discovery of South African diamond mines in 1867 meant that a stone that once only the wealthiest could afford, was now within the price range of many more. Some believe electric lighting may have been a contributory factor in the rise of diamonds and decline of amethyst too, as it made colourful jewellery appear gaudy, and added to the fashion for ‘white’ jewels.

Amethysts take temporary back stage
Fast forward to the 20th century, and De Beer’s advertising slogan accelerates the process, with their famous line “diamonds are forever”. But while diamonds became the symbol for love and marriage, amethyst was no longer in the limelight.

The comeback of a beautiful stone
A retro revival in the mid-20th century created a return to popularity.
But although its fortunes – and its value – have ebbed and waned, there’s always been a strong following and interest in old mine amethysts, with the main attraction the deep and luxurious purple colour.

Big is beautiful
So what else determines the value of amethysts? Unlike diamonds and rubies they don’t increase exponentially in value the larger they are. That’s because unlike those other gemstones, amethyst is normally found as larger crystals, so the size of the raw material doesn’t constrain it. That means one of the most important factors in its price is the skill with which the stone has been cut.

Turn to the dark side
Colour plays a significant role is determining the value of amethyst too. And the darker the better, with dark purple stones selling between 3 to 5 times more than lighter material. That’s why, for example, amethyst from Uruguay tends to be significantly more expensive that amethyst from Brazil – it’s also significantly darker.

No shade is a shade better
The colour should also ideally be uniform throughout, rather than, as is often the case with amethyst crystal, formed of lighter and darker purple areas.

Clarity needs to be taken into consideration too
You shouldn’t be able to see any inclusions or flaws with your naked eye.  And beware chipping or damage that may have been caused by extraction or preparation of the stone.

Today amethysts are back in favour
They offer people the opportunity to buy larger and more dramatic stones at a price that won’t break the bank. And although its popularity wanes and ebbs, this stunning and beautiful purple gem will never go permanently out of fashion.