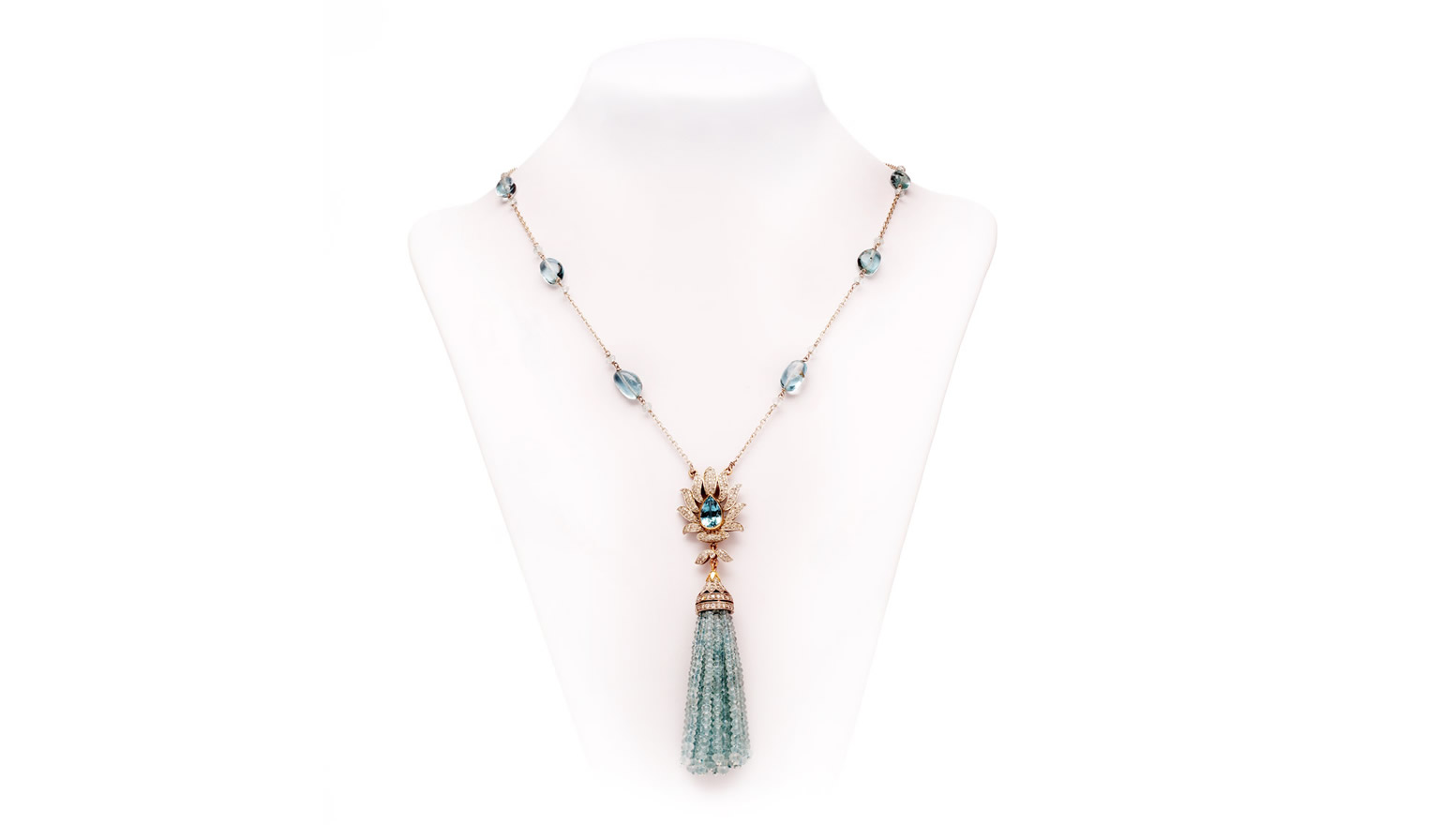 Posted at 10:50h in Birthstone by jlm_admn

The gem stone for March is aquamarine

There are no prizes for guessing the colour of this month’s gemstone.
March’s gemstone is named after and defined by its colour so if you have a stone that’s not blue, it can’t be aquamarine. Not surprisingly, it has a long association with the sea.

An uncommon gem, created by a common mineral
Aquamarine forms deep inside the earth, and is a variety of beryl, a type of silicate mineral.
But although silicate is one of the largest classes of minerals that make up approximately 90 percent of the earth’s crust, beryl is much rarer. Unlike some minerals, it can form in a variety of rock, including both igneous made from molten lava, and metamorphic, which as the name suggests is rock that has changed from the original by immense pressure and heat over time.

Made from beryl
Beryl is typically found in structures high in granite deposits and combined of interlocking rocks and minerals, called granitic pegmatites that are formed by massive geological pressure over hundreds of thousands of years.

Hot stuff
As magma works its way to the surface or tectonic plates shift, many stones are forced together, with softer stones slowly squeezed and creating large deposits. If there are enough impurities present, eventually these deposits will create beryl gemstones, with those pushed to the surface earlier in the process more likely to contain pure, gem-quality aquamarine crystals. Natural geological processes push these deposits to the surface, where they can be mined.

Aquamarine is an allochromatic gemstone
In its pure form beryl is transparent. But aquamarine is an allochromatic gemstone, which means it’s coloured by natural impurities. Two iron compounds, ferrous and ferric iron gives aquamarine its colour. Ferrous iron provides the gemstone with the trademark blue colour that’s known and loved by gem enthusiast the world over. While ferric iron turns the gem slightly green.

Other allochromatic gemstones you might know and love
Aquamarine isn’t the only allochromatic beryl gemstone that you’ll recognise.
Emerald is a beryl that has been coloured by the presence of chromium, iron and vanadium. Morganite is beryl coloured by manganese. Golden beryl or heliodor is coloured by iron, and the extremely rare red beryl (once known as red emeralds) derives its colour from manganese. Maxine, another blue variety of beryl, owes its colour to natural radiation.

Revered by the earliest civilisations
Aquamarine was first documented in Greece, around 480 to 300 BC, and in ancient times was believed to instil courage into anyone who wore it.  Indians wore the stones in amulets, and the Egyptians carved them into talismans.

Popular in India, Egypt – and with Buddhists too
In India, Buddhists not only revered aquamarine as a stone of the sea. They also believed it represented love and mercy. They thought the stone had the power to renew or strengthen old love. And they began a tradition of giving a new bride an aquamarine stone the morning after her wedding.

And the Egyptians held it in such esteem that they began to import it in quantity from India in the second century BC. Although to them it represented a symbol of happiness and eternal youth.

Named aqua-marine by the Romans
However it was the Romans who gave aquamarine its name, which is derived from the Latin which loosely translates as “seawater”. The early Romans also referred to the stone as the sailor’s gem.

Poseidon and Neptune’s stone
In both Greek and Roman mythology aquamarine was also the sacred jewel of Poseidon and Neptune, their respective gods of fresh and seawater. They believed it had fallen from the treasure chest of a mermaid and had the power to calm stormy waters and protect travellers from peril at sea.

Other Roman tales about the magical properties of the stone included a belief that it could purify water. And enemies could become friends by drinking water together if it was poured from an aquamarine chalice with the subscription of a frog.

As recommended by Pliny the Elder
Pliny the Elder (23 AD – 79 AD) a Roman author, natural philosopher, creator of the Naturalis Historia encyclopedia and commander of the early Roman Empire was a fan.

He wrote, “The lovely Aquamarine, which seems to have come from some mermaid’s treasure house, in the depths of the summer sea, has charms not to be denied”.

An antidote to poison
In the Middle Ages aquamarine was used as a soothsayer’s tool, and many believed a full moon intensified its power. While a man called William Langland, author of Piers Plowman, an alliterative verse and allegory that popularised complex religious themes into layman’s terms, proclaimed in 1377 that the gem had powers to purify and protect people from poison. His reputation was such at the time, that his theory soon spread across Europe. Whether anyone was successful in its use to recover from a poisoning episode has never been documented.

Popular with nobility, kings and queens
Remember this was in a time when poisoning at the hands of their enemies was not an uncommon fate for royalty and nobility. And amulets of the blue-green jewel became a familiar article worn by noblemen and rulers. However, there are only two crowns of Europe that feature aquamarine: the Crown of Saint Stephen and the Crown of Saint Wenceslas.

The Crown of Saint Stephen
The earliest, the Crown of Saint Stephen is also known as the Holy Crown of Hungary.
This crown was sent to Hungary around 1001 AD by Pope Paul for Stephen 1st coronation, who was the first king of Hungary and a devout Christian. However at the time, it had no aquamarine jewels – these were only added more than 600 years later in 1608 by King Mattias II of Hungary, who was also Archduke of Austria from 1608 to 1619, King of Croatia and Holy Roman Emperor from 1612 to 1619. A title as impressive as his headwear!

The Crown of Saint Wencelas
The other Royal European headpiece that features an aquamarine stone is the Crown of Saint Wenceslas or Czech Crown. This was commissioned in 1347 for the coronation of Charles IV, the first King of Bohemia to become Holy Roman Emperor. Encrusted with one hundred and sixteen precious jewels, including a single aquamarine mounted into a golden cross, this stunning gold headpiece is the fourth oldest surviving crown in Europe.

To be worn with care -especially if you’re a tyrant
There’s an interesting aside to this crown.
An old Czech legend says that any tyrant who places the property of Wenceslas on his head will die within a year. And jumping forward to the Second World War, Nazi chief of the Gestapo, Reinhard Heydrich, one the darkest figures within the Nazi regime, whom even Hitler referred to as the man with the iron heart, is rumoured to have tried on the crown.
Whether it’s true or not no one knows, but what is beyond dispute is that in May 1942 he was assassinated by the Czech resistance.

Featured in all the best collections
Aquamarine gems feature more often in tiaras, necklaces, brooches and earrings in royal collections than crowns. However, few equal the splendour of Queen Elizabeth’s Brazilian aquamarine set of jewels, presented to her in 1953 by the Brazilian president as a coronation gift on behalf of the people of Brazil. She later commissioned an aquamarine tiara to match that the dresser to The Queen described as “majestic in appearance but cool and calming”.

A gift from Brazil
Brazil also honoured First Lady Eleanor Roosevelt with a large aquamarine sent from President Vargas of Brazil in 1936. It even had a mention in her memoirs where she wrote the gem serves “a good purpose by symbolising the kindness and generosity of Brazilian feeling toward our country.”

The perennially popular gemstone
Today aquamarines are a popular gemstone that many people use as an alternative to diamonds. Their sparkle and their colour are not dissimilar, but they are more affordable.
What’s more, aquamarine stones don’t increase exponentially in price as they get bigger, so it isn’t hard to find an impressive-sized gem that’s in your budget.

What a whopper!
It’s unlikely you’ll be able to spot anything remotely the size of the biggest ever aquamarine rough found in Brazil back in 1910. It weighed an astonishing 100kg (243 lbs) and when it was broken down into smaller faceted stones for use in jewellery, they weighed over 100,000 carats.

Cut to size
The world’s biggest faceted aquamarine called the ‘Dom Pedro’. Shaped like an obelisk and criss-crossed with diagonal detailing it weighs an extraordinary 10,363 carats and is on display at the Smithsonian National Museum of Natural History in Washington DC.

How to spot a good aquamarine gemstone
So what should look for if you’re thinking of buying one of these exquisitely coloured gemstones?

Colour is obviously an essential factor
Typically it should be light blue with a greenish or turquoise colour. Although the darker it is the more valuable. Some aquamarines appear almost colourless in daylight, yet display a beautiful tone under the candlelight or a light bulb, which is why it’s sometimes referred to as an evening gemstone.

Whatever colour the aquamarine it’s preferable if it’s even throughout the gem. If there are different patches of lighter or darker colour within the gem it will diminish its value.

Big stones aren’t rare
Size, or carat weight, doesn’t increase exponentially with aquamarine, because large gems without imperfections are relatively common. In other words, an aquamarine gem that is five times larger than another aquamarine gem, will only cost roughly five times more. In contrast emeralds, another beryl stone, are usually small, so as they increase in size the cost rises dramatically.

Handle with care
Remember too, that aquamarine is less durable than a diamond or a sapphire. With a score of 8 on the Mohs scale of mineral hardness, compared to 10, it needs protection from knocks and scratches. So, if you’re going to wear it for regular use, make sure it’s well protected.
You’ll also want to consider where the aquamarine is mined, and try to choose ethical, conflict-free gems.